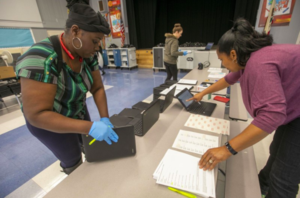 Some districts and in schools have already been conducting daily, mandatory classes for all their students since last week.

Some districts and in schools have already been conducting daily, mandatory classes for all their students since last week.

Students are logging onto online school every day at set times between 8:30 a.m. and 3:20 p.m., said Cheryl Ward, CEO of E3 Civic High.

Teachers hold their classes using Zoom, an online video conferencing tool that allows dozens of students to see each others’ faces and the teacher’s screen at the same time.

Students “raise their hand” using a button on Zoom to participate in class discussions. Students use virtual “breakout rooms” for smaller group discussions or group assignments.

Ward said it hasn’t been difficult to get students to show up to online class every day.

“Funny thing, attendance improved when we went online because the kids don’t have to go anywhere. They just have to get up,” Ward said.

Getting devices was not a problem for E3, which since 2013 has given students MacBook Air laptops. Most of the school’s curriculum is on the online Edgenuity platform; the school also uses online Advanced Placement textbooks.

A school staff member was tasked with making sure each of the school’s 405 students have internet access. For students who lacked internet, the school connected them with free and $10-a-month internet for low-income families being offered by Cox and AT&T.