From the arts front lines: Choral teacher Cheryl Slavik looking for ways to ‘keep them singing’ 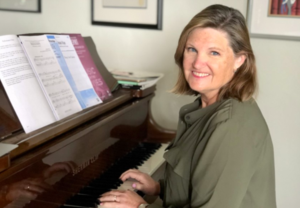 I realize I always had the technology to have people visit the class, virtually, but never thought of doing it until now’

“At e3, we have two choirs. Choir 1 has 14 students and is open to anyone at the school. The other choir is Madrigals, which has eight students and requires an audition. We were supposed to have our spring concert March 25 and do songs, in different languages, with the theme of peace, unity and hope.

“We were going to finish the concert with both choirs doing ‘An Irish Blessing,’ which concludes: Until we meet again / May God hold you in the palm of his hand. But, at this point, the concert has been canceled. ... If we need to reschedule things, we will.

“We’re blessed e3 has the ability to switch and do virtual training, because the students have laptops to use at school that they’re now working on at home. It’s business as usual, except it’s online. So, teaching-wise, I have to be a lot more creative and think outside of the box. Because, typically, we’d be working on a song and break into smaller groups to practice separately and then together — and that’s difficult to do virtually.

“I’m looking at ways to keep them singing. Last week, we listened online to Haydn’s Symphony No. 104, his last symphony, and I had them research why he composed it the way he did. Today, we watched a three-minute TED Talk Bobby McFerrin did on the pentatonic scale and why it’s used so much. I had them research the scale and find examples. I’m also inviting guests to talk online about the music industry. I realize I always had the technology to have people visit the class, virtually, but never thought of doing it until now.”